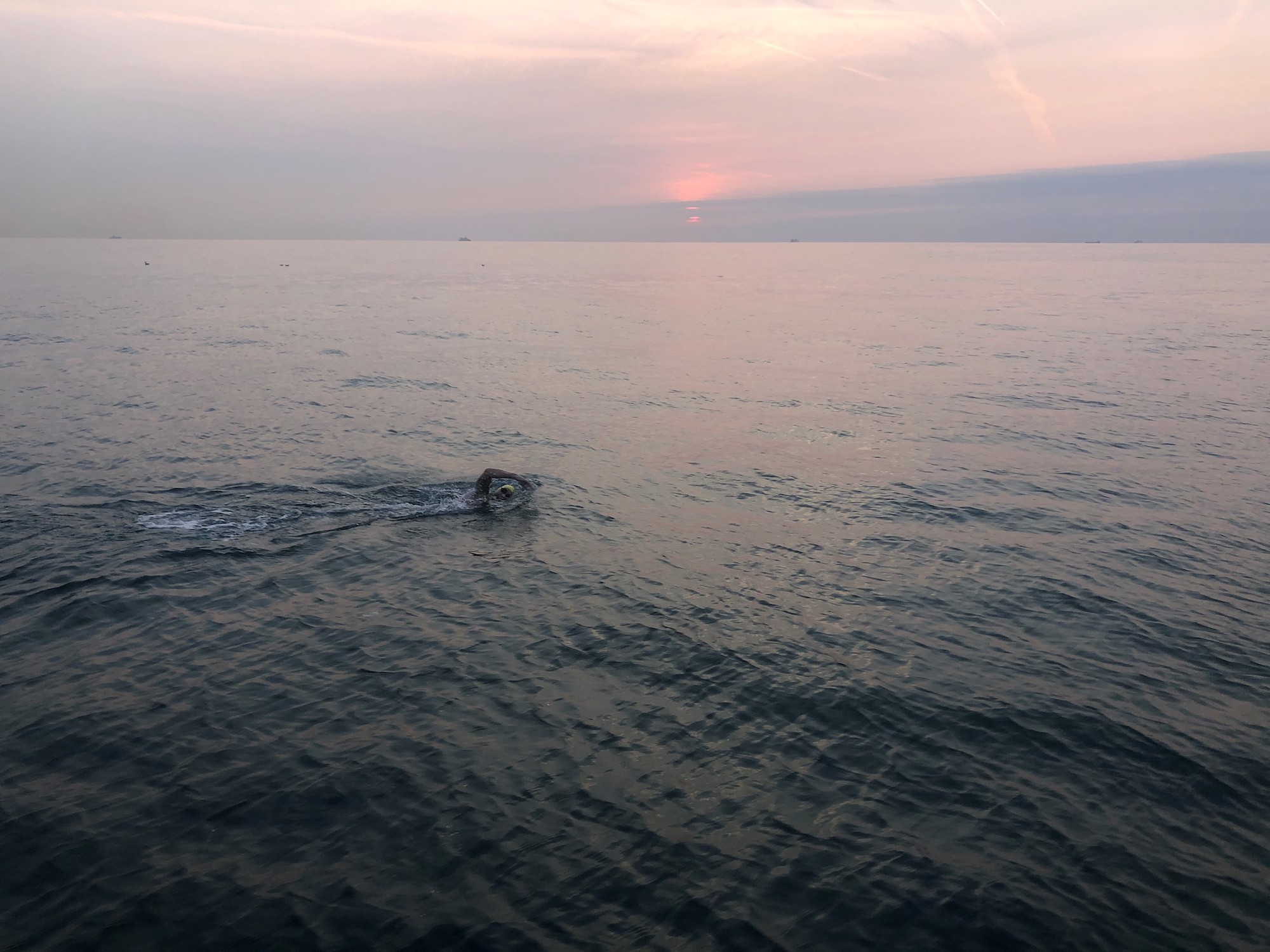 Hi from Quarantine in the luxurious Meriton apartments Mascot 😊

What a journey… It was December 2018 in Mollymook where the seed was planted to take on the English Channel. Best mate Luke Stewart and I, over a few too many beers concluded that we both had the same goal. This had been in the back of my mind for years, but I was too scared to say it publicly as I wasn’t sure I was capable.

I called Murph Renford (son of Des, former King of the Channel) and told him after all his badgering I was ready. Luke and I had a lot of work to do. We were both too lean and needed an extra 5kg to avoid hypothermia as temps in the channel range from 14-17 deg. Also, Luke had never swum in a squad! Unbelievable mind set.

Our weekly swim totals ranged from 30km-50km and during our preparation COVID hit. The pools closed and we were forced to jump barricades at Clovelly to swim at 5am. Perfect for cold water exposure as it ranged from 15-17 degrees over winter. We both had doses of hypothermia during the preparation, Luke suffering badly twice. Our wives Sheree and Jade were incredible supporters the entire journey, and this could not have happened without them.

We committed to raising $74,000 for a new Nava paediatric ventilator for the Royal Hospital for Women through the Running for Premature Babies charity. This ventilator had helped save my second son and Bronte nipper Ryder, when he was born at 27 weeks. One ventilator saves around 1000 babies every year. Through the generosity of our local community including members of Bronte surf club and Bronte splashers, we have nearly doubled the target and will also supply two and possibly three humidicribs for Alice Springs Hospital that cares for 350 babies a year and covers an area of 2.2 million square kilometres including South Australia, Western Australia and the Northern Territory. 70 percent of the babies they care for are Indigenous.

COVID-19 restrictions impacting training regimes, uncertainty whether the swim would be allowed by French and English authorities and international travel bans limited numbers attempting the Channel this year. Amidst all the uncertainty, we were granted special permission to leave the country due to the charity we were supporting. When Luke and I arrived in Dover, we waited for our swim windows with a daily 1-hour swim in the harbour followed by a very average coffee and a croissant and second lighter swim in the afternoon.

Luke received the call on Wednesday 9th September. His attempt was to be the following day at 2am. I drove him to the marina, we said goodbye, and I was confident he would get across as he had morphed into a channel calibre swimmer through relentless effort and kilometres throughout our preparation. The weather unpredictably turned when he was 1 hour into his swim. By 7am, with severe sea sickness he had vomited up 4 of his feeds that are given every 30 min, 300mls at a time. Rotating carb and electrolyte drinks followed by flat coke and then a protein/carb mix. The Ondansetron (anti vomiting drugs) thrown into his feeds weren’t working and 7 ½ into his swim, with uncontrolled vomiting he was pulled from the water and collapsed on the boat. To add insult to injury the boat then broke down and he floated for 4 more hours, head in a bucket until a tugboat towed the stricken vessel back to the harbour. He was crushed and so was I.

Later that afternoon I called my pilot Reg Brickell, a well-built old sea dog, always in a singlet with a gold hoop earring that can be found at the pub when he’s not ferrying swimmers from one country to another. He is considered the best pilot of his era having learnt from Reg senior who piloted Des Renford for all his 19 crossings. I saw a 6 hour ‘good weather window’ forecast for the following day. Reg said the two swimmers in front of me couldn’t make it far enough across in that window and if I was game, he would take me. I said let’s do it, so the meeting was set for Dover marina at 2am the next morning Friday 11th. Luke was still looking green and swollen and I asked him would he be ready to jump on my boat to help my two London based support crew, Josh Renford and his mate Philip. Without hesitation he said, ‘there is nowhere else I’d rather be’!

The morning was cold and still. I received a briefing of what I could and couldn’t do before we headed off (basically don’t touch the boat till you touch France). I jumped off my boat the Viking Princess at 2:45am and swam to Shakespeare’s beach for the start with the sheer white cliffs of Dover looking over me. The horn sounded and I dove into the pitch black 16-degree water siting the flood lights off the side of the boat to guide me. I got into a rhythm and remember thinking how long it seemed till the first 30 min feed. With Luke on nutrition, my 300ml feeds consisted of 1) electrolyte and carb mix with half a gel, 2) electrolyte and carb mix, 3) flat coke with 3 sugars, 4) sustagen. This was repeated every 2 hours.

The first 4 hours were in the dark so a fair bit of sensory deprivation, then the sunrise was a welcome change of scenery. I realised I had an amazing day when I couldn’t see any chop once the sun came out. During the swim I saw 2 refugee boats paddling to the UK from France, one was inflatable (no sharks 😊).

After 7 hours I hallucinated, seeing my wife as a mermaid under the water looking up at me and a rusty metal door frame hanging from the side of the boat. I knew I was hallucinating so just kept thinking about my stroke. I had screaming shoulders and legs beginning to cramp. I could see France, but it never seemed to get closer. After a little over 9 hours in the water I heard the IRB tender kick over. This is the sign you are close to the finish line. One final push, 9 hours 36 min later I climbed onto a big French rock, no sand insight, I was at Cap Gris-Nez. The horn sounded signalling I had officially finished! It was overwhelming, all the preparation and hard work, cold exposure was all worth it.

Surprisingly I was later told it was the fastest crossing of the 2019 and 2020 season. Heading back on the IRB I saw Luke’s arms in the air, and he couldn’t have been happier, I mirrored back and hugged him when I boarded. My tongue swollen from the salt I slurred my words and thanked a best mate, my wife, the crew and our amazing community. This whole experience felt like a beautiful story of mate ship, challenge and being part of a generous community willing to help families and babies they have never met. What an honour and a privilege to be a part of!