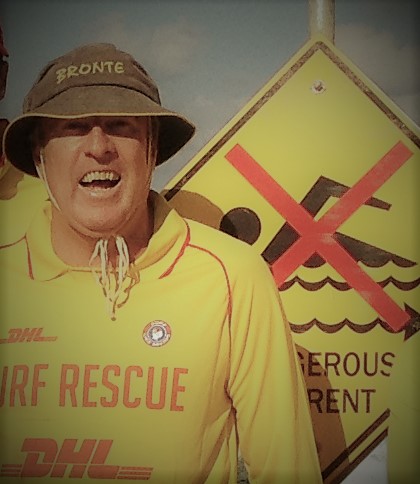 It was a pleasure to be asked to interview my mate Paul Johnson for many reasons - partly because I thought we should get his thoughts and memories down as he is very old and may start to lose it soon ☺.  I hope you enjoy hearing all about Johno and maybe learn a thing or two along the way too.

Paul is a Life Member of the Club and an active Patrol Captain.  His service dates back decades and has included Vice President, Club Captain, Instructor and IRB Driver. Forgive my humour, it was going to be funnier but the longer we spoke (he can go on!) the more impressed I became with his service and wanted to share it with members old and new.

Johno you have been around for a very, very very long time (!) what are your first memories of Bronte Beach and of the Surf Club?

I first came to Bronte as a young kid to learn to swim in the pool and the bogey hole. The local barber, George Lockwood taught us how to swim and cut our hair!

In those days you had to pay to enter the pool, there was a kiosk you had to enter into the pool had wooden decking and your feet often got splinters.

One my earliest memories is swimming around the bogey hole and climbing the rocks to sneak into the pool to avoid paying. (DS: Paul has always been “careful” with his money even from the early days ☺)

I first entered the surf club when I was about eight years old for a swimming club presentation. Bronte nippers didn’t exist then.  For the young kids we had a swimming club at the pool.  We used to do swimming training and competitions there with the presentations held at the Surf Club.

I joined Bronte SLSC in 1974, aged 13. It was normal at that time to go straight from the swimming club to the surf club so there was no question that my mates and I would join as soon as we turned 13.

Have you always lived in Sydney and the Eastern suburbs?

I am a born and bred local. I grew up in Charing Cross, my father too - he was an electrician with Sydney City Council.

How Long have you been patrolling – I think it predates computer records - and is there any truth in the rumour it was with Major Bond?

I have been a patrolling member since I joined in 1974. Back then we had surf reels. You set the beach up with harnesses maybe two or three across the beach, the patrol captain nominated a swimmer, a reelman, a linesman, there were no tubes but we had boards.

We did also have surfboats available if we had a crew (DS: Johno states with pride that he was never silly enough to get in the surf boats – I am not so sure ☺).  There wasn’t a tent, or even a uniform but we did have the surf hat.  The uniforms came along in the late ‘80’s or early 90’s. (DS: what’s a decade among friends - this is why I am interviewing him now☺!!)

The other thing was, when I started it was shirt off all day, get a tan, and no sunnies – people didn’t have the money for sunnies. That all changed in the ‘80s with “slip slop slap”.  Most club members spent much of their free time at the local beaches.  During school holidays we would spend all day at the beach from 7am to 7pm swimming, surfing and just hanging out - we were lucky.

You were one of the first people to drive IRB’s and have been a stalwart of the IRB team - apart from moving from Coal and steam powered craft to the more modern petrol ones - when did you start driving? What are the changes you have seen and what do you say to people who are thinking about extending their skills to include IRB Crewing and Driving?

Wally Dobrow from Bronte went off and did the first training course to learn to drive the IRB’s. He came back and I, along with some of the other members like Jim Morrow and Craig Wallace, formed part of the very first Bronte course, we trained as IRB Drivers and Crew at the same time.

I was awarded my IRB Drivers licence in 1981, the first IRB had a large inbuilt radio bolted at the back of the boat – no hand held radios then (!), the floor board was a different style but otherwise not too much has changed in the design.

At first there wasn’t much space, or respect for the IRB! It was squashed between the surf boats and was stood on, rested on and subsequently often completely deflated before patrol.

The engine and fuel needed to be stored under lock and key - the only place to do that was the beer keg room so the IRB Captains ended up with a key to the beer room…my lips are sealed!

The big change for the IRB at Bronte has been the use of a lightweight trailer with inflated wheels making it easy to get the boat on and off the beach.  Back in the day we carried it down. It usually took 3 trips with Boat, motor and fuel bladder all separately carried to and from the beach.

What tips do you have for current day IRB drivers?

(DS: The tips Paul suggests are probably useful across all surf sports)

* Practice in all conditions.

* Have respect for the waves, often the small waves cause more difficulty because the large waves are easier to manage and are more predictable.

(DS: This is a great motto in the surf and in life – you heard it here first, folks)

Can you tell us about some of your memorable moments (but remember I am not writing a novel…)?

My most dramatic moment had to be when I was the rescue co-ordinator of the famous Bondi to Bronte race that resulted in over 200 rescues. Having to stand and coordinate the mass rescue, allocate and re-deploy resources, boards, tubes, ambulances, picking spots to put people in, multiple rolling rescues in huge surf. It was only 45 minutes, but it was frantic and incessant. I sat afterwards, I had nothing left in me.

I also recall that before we had such an expanse of volunteers helping out everywhere the committee used to actually do everything - maintenance, rosters, bar duty and a whole lot more.

There are so many stories I could tell of some of our older members like Bluey, Jim Morrow, Merv Gladstone and Gus Reeves and so many more but we don’t have time for them here but in current times one story that really resonates is one that Jim Morrow tells of him and others sneaking under the barbed wire at Bronte Beach during World War 2 to have a swim! (DS: History repeating itself?)

Many people know you as “the bloke in the bucket hat”, and a whole lot more☺, it is a unique fashion item, what’s the story there?

As a child I was always out in the sun, but once I hit my 20’s I started to get skin checks, have had a few bits and pieces removed especially from my ears and a few of the other guys have had some issues, so I originally got it to protect my ears.

However, I became known for it and now it is a way for my patrol and others to know where I am and spot me on the beach: “The guy in the bucket hat” is the patrol captain.

I have been a Patrol Captain since 1983.

What makes a good Patrol Captain is a good team. You can be a good individual lifesaver but you need the team.

I am “paranoid” in that I never take my eyes off the beach, I can talk to people and have the ability and discipline to keep “eyes on” and I train that in my teams – eyes on the beach is still key.

The Basics are the same – observation and surf skills, the big change really is that the patrols were originally self managing and now the Patrol Captains take a role as a manager and set the beach and set the team for the shift

A good PC keeps in contact and knows the skills of their members while patrolling.

Of course back in the day there were no proficiencies, so I would often take those on my patrol for a swim or a surf to check their skills.

You are a Life Member - what is that…and is it true that as a life member it means you’re very old  and as one of only a few patrolling life members you have your own defib on patrol and a special throne in the tent…?

Being a Life member is not an award that just comes with service. It can be awarded across a whole range of service given to the club be it patrolling, competition, administration, it is given to people who have a passion for the club and what it stands for, it is a bridge between the history and the now.

I like to think of Life Members as the custodians of the club, its history, its foundations and what is stands for. They ensure the club will be here in 50 years and 100 years. There are other patrolling life members: Dave Fleeting, Graham Ford, Coleen O’Neill, Col Mcdermid who are still active in other ways (DS: and apologies if he missed any but as I say, he is very old).

Seriously, your service is amazing and the club is lucky to have members like you. What keeps bringing you back to season after season?

It’s the people: the camaraderies, the patrol, a great group of people with a passion that is shared with me to give something back to the community.

I like to think that my contribution is valued by the community and I hope the people I, and my patrol, have rescued over the years have gone on to do good things - that’s my wish.