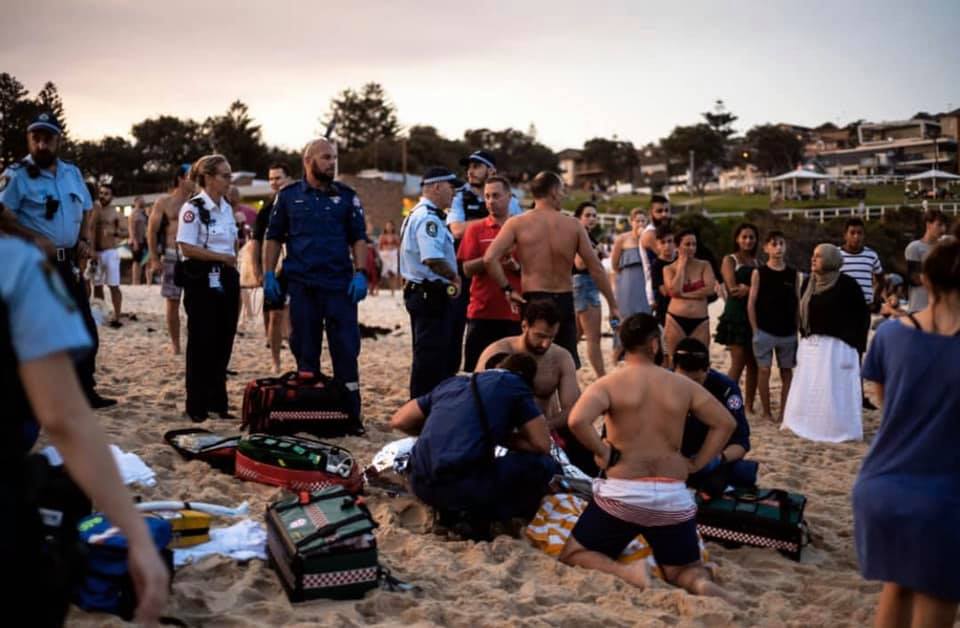 At 7.45pm on Saturday 1 February, Bronte SLSC Club Captain, James McLennan, and his wife Kirsty, a fellow lifesaver and long time Under 6 Girls Assistant Age Manager, were having dinner on the northern headland at Bronte outside their home. It was getting dark, yet the beach was still crowded as it was extremely hot. Kirsty and James spotted a group of distressed swimmers being swept out to sea by the Bronte Express, at the beach’s southern end. They immediately abandoned their meal and prepared to act.

As they headed for the beach James tapped out a short but effective message to the Club’s ‘Board Skills’ What’s App group: ‘Mass rescue. All assistance now required.’ Within moments group members were replying, indicating that they were on their way. James also commissioned two bystanders to call 000 to request ambulance and police assistance and also put out a call for any volunteer Lifesavers who might be in attendance at the private function being held at the Club.

James and Kirsty grabbed rescue boards and paddled out to the distressed group. Conditions were nasty.  It was choppy, there was a lot of water moving around and there was a strong north-easterly blowing, which made the paddle quite difficult. A first glance suggested there were five swimmers in immediate unassisted distress with the potential for more.

James, first at the scene, brought five patients to his board. This seemed manageable, despite the conditions and he was able to priority direct other volunteer Lifesavers (Ivan, Eric and Marcos) as they arrived in succession after Kirsty, to pick up patients from either his board or nearby. The initial aim was to get all patients off the reef and away from the rip to regroup and return to shore in a controlled manner. Due to previously “training hard to rescue easy” in these types of conditions, the team performed exceptionally well with minimal direction and reduced overall visibility, despite the wind chop , waves and power of the rip.

During the triage another patient in the distance, Esa, was spotted by James with a member of public who had him clinging onto a tiny boogie board. Esa had taken on water/gone under a few times and was presenting a risk to his aider so immediate interception was required. Esa presented in a semi-conscious/semi responsive state and had pink foam coming from his mouth.

James, after clearing the patient’s airway, feared Esa was having a heart attack or suffering a pneumothorax from post drowning like symptoms. James made the difficult triage decision to change the priority sequence of aid and assistance for his multiple patients, and fast tracked getting Esa to the beach to access advanced care.

Part of this triage meant that two stable patients had to stay out the back with the repurposed boogie board aided by a confident swimmer (Paul ?) who had fins. James clearly and calmly instructed the two patients to hold on to the boogie board, not to each other nor Paul, and to try to relax, assuring them they were in a safe spot, clear of the rip and reef.

He told them that multiple lifesavers were on their way and instructed Paul to keep the board between himself and the two patients to minimise risk to himself. The patients acknowledged that this was the best course of action in order to save the critical patient’s life.

Esa, the critical patient deteriorated to unresponsive and his arms dragged in the water as James paddled him towards shore.  James knew he could not stabilise the patient enough to do adequate CPR and that attempting to administer critical care on the water with the NE wind chop was too risky so could only briefly pause to clear his airway. , James struggled to keep a now unresponsive Esa on the board as he paddled to shore and feared Esa’s rescue had now become a body retrieval situation. James was however buoyed on by seeing more volunteer Lifesavers and off-duty Lifeguards paddling out, and by all those on the beach yelling encouragement and managing the shoreline.

On shore James, as part of a team, did an abridged resus and airway clear, before a bag valve mask oxygen was administered. A bystander (Roma) who, as fortune would have it is an anaesthetist, was on the shoreline.  She confirmed vital signs and that the patient had subsequently become responsive. The team transitioned Esa into a recovery position with towels and thermal space blankets and maintained his airway whilst transitioning him to therapy oxygen.

As part of that airway maintenance, Roma and James assisted Esa in draining and regurgitation large volumes of fluid and food, carefully removing and replacing the oxygen mask as required. James stresses how useful it was to have the calm anaesthetist present to accurately monitor and report vital signs as it meant decisions were sped up and the best course of treatment was quickly determined – in this case not commencing CPR.  Which could have resulted in broken ribs or Esa possibly choking while lying on his back.

One of the volunteer Lifesavers, Coco Bianchi, was assisting administering oxygen and first aid, all the while knowing that her 13-yr-old nipper daughter Miki had paddled out to sea to assist swimmers. They breed them tough at Bronte but concern for Miki added to what was already a very stressful situation. Two new graduate Lifesavers, the two ‘Wills’, arrived with the defibrillator and were subsequently re-tasked by James to do elevated surveillance from the pool. The calm professional “what can I do next” nature of the three younger Lifesavers and Coco was truly commendable.

Paramedics arrived and Esa’s care was now the responsibility of the professionals. Matt Evans, a highly capable SLS Sydney Branch oncall Duty Officer who is also a volunteer, arrived and began working with the police whilst commanding with James on shore so   incident updates and subsequent SAR resource management and re-tasking could be escalated and managed in the most effective way.

Given the condition of Esa and the fact that there had initially been about 40 swimmers in the water – James and others now feared that there might be more patients in the water, out beyond the rip with mixed reports of the number patients recovered verses identified and known conditions. The Toll Helicopter had been brought in with its night lighting capability.

The search continued in the water, both for other patients and for club and local community members who might have been over-extended. Fortunately, these concerns proved unfounded, thanks to the support on the shoreline of the Bronte Community, volunteer Club members, Lifeguards and the oncall duty officer Matt Evans working seamlessly with Police and other agencies.

Countless preventatives were conducted on the sand banks with assistance given to multiple members of public. Club members kept paddling out the back to assist, to share the load, to check for others and on each other. Others helped close the beach down and get yet more ignorant swimmers out of the water. While Wally Eggleton and Noah Finnimore were clearing the beach after both performing tough rescues, Kirsty McLennan and Craig Betts did a final sweep of the water, together.

James stresses that everyone acted without hesitation, and more importantly, knew what to do despite there being limited information available at the outset. He was confident that both he and Kirsty could rely on rapid, high quality individual action and team support from the Club members they had hailed via WhatsApp to back them up. This confidence was a based on being part of the Club wide adopted Board skills training sessions put in place by Bronte’s Director of Surf Sports David Finnimore.

It should be noted that a major refocus across Bronte Surf Club over the last three seasons is saving lives must always come first over competition.  Therefore, actively engaging and raising the members baseline board, surf swimming and rescue skills to what the Clubs management believes is the minimal requirement to be a Lifesaver at Bronte or a lot of beaches, is now part of  Bronte Surf Clubs culture as its members collaboratively Train Hard to Rescue Easy!

James also acknowledges that the Waverley Lifeguards perform such rescues every day and salutes their professionalism and commitment, particularly when they return after-hours having just worked a thirteen-hour day. 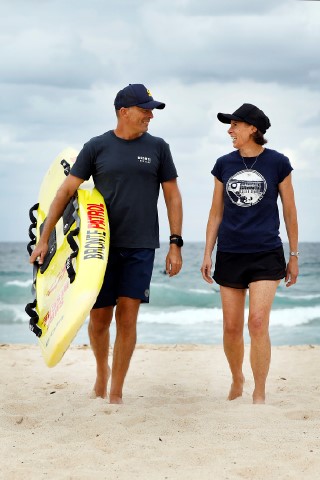